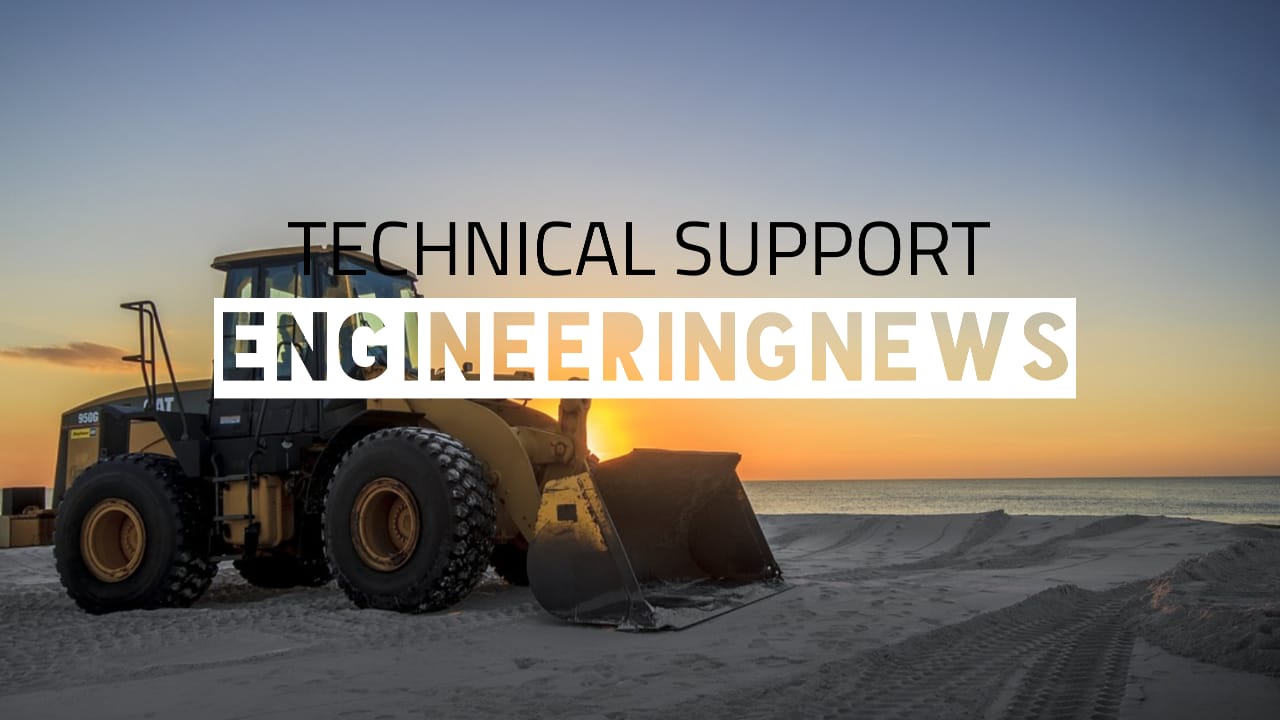 by engineeringnews on 7:22 PM in CONSTRUCTION

§  What is Curing of Concrete? (Introduction)
·      Curing, is the process of keeping the concrete surface wet for a certain period of time after the placing of concrete so as to promote the hardening of cement and to develop the properties of the concrete mixture was designed to achieve, consisting of a control of temperature and of moisture movement from and into the concrete.
·      Curing is required to control the rate and extent of moisture loss from concrete during the hydration of cement.

§  Time & Period of Curing:
·         Right Time for Curing:
It depends on the following
1.       Initial Curing – After completion of concrete placing the bleeding of concrete (rate and duration depends upon the factors like properties of the concrete mix, thickness of concrete and compaction method) starts, in which bleeding of water through the concrete surface occurs due the settlement of concrete. When the bleed water evaporates from the surface and the surface starts drying, then the initial curing Is required to prevent the plastic shrinkage cracks & to minimize the moisture loss of concrete before and during finishing operations.
Initial curing should be done by using the technique like fogging, using of evaporation reducers, or by providing the sunshades and windscreens.
2.       Intermediate curing – It is done when the finishing operations has been completed before the final setting of concrete. It is expected to be used when the required surface texture of concrete member is achieved rapidly, or when the setting of concrete is delayed.
3.       Final Curing – It should be done after the final setting of concrete to prevent the drying of concrete surface.
·         Period of Curing:
The curing period or duration of concrete depends on the following factors –
a)   The temperature and moisture conditions of surroundings.
b)  The type of concrete grade and rate of hardening of concrete.
c)   The size of concrete structural member.
d)  The exposure conditions of the concrete surface during and after curing.
The curing period as per IS 456 - 2000

At an age of 1 day the 120°F concrete was strongest and the 25°F concrete was weakest. By 7 days the high-temperature cured concretes had no more strength than the 73°F concrete or even less. By the age of 28 days the high-temperature concretes were weaker than the 73°F concrete. From 28 days to 1 year the 55°F concrete was considerably stronger than the 73°F concrete. All of this suggests that, provided there is continuous curing, concrete cured at about 55°F for the first 28 days ultimately reaches the highest strength (Concrete).
Klieger also investigated Type II and Type III cements under the same conditions and concretes made with each of thesecements with 2 percent calcium chloride. Data for the other cements and admixtures resembled the results described forType I but were not identical.
Although the best curing temperature was 55°F for Type I and Type II cements, for Type III thebest temperature was 40°F.
§   Necessity or Importance:
a)   Enhance Hydration of Concrete and helps to achieve desired Strength.
b)   Improved durability of concrete by reducing cracks.
c)    Higher serviceability performance by increasing abrasion resistance.
d)   Improved microstructure by developing better hydrate gels and solid mass.
e)   The resistance of concrete to abrasion is considerablyincreased by proper curing.
f)    Curing protects the concrete surfaces from sun and wind.

§   Effect or Disadvantages:
Following are the major disadvantages of improper curing ofconcrete –
a)      The cracks are formed due to plastic shrinkage, dryingshrinkage and thermal effects.
b)      The durability decreases due to higher permeability.
c)       The frost and weathering resistances are decreased.
d)      The chances of ingress of chlorides and atmospheric chemicalsare very high.
e)      The compressive and flexural strengths are lowered.
f)       The rate of carbonation increases.
g)      The surfaces are coated with sand and dust and it leads tolower the abrasion resistance.
§   Methods of Curing:
There are three basic ways of curing concrete –
1.    The first, involves keeping the surface of the concrete moist by the use ponding, spraying/sprinkling, damp sand or damp hessian.
2.    The second, prevents the loss of moisture from the concrete by covering it with polythene sheeting or leaving the formwork in place.
3.    The third involves the use of spray or roller applied curing compounds.
The different types of Curing methods are described below –
A.    Water Curing Method:
Water curing method is the general methods of curing as it fulfils all the requirements of curing. Water curing, if properly carried out can be most efficient and the most appropriate for some types of works. Water curing can be done in the following types:

i.     Immersion Method:
This is the best water curing method. In immersion method, finished concrete is immersed in the curing tank or curing pond. This method of total immersion is practically not possible unless the concrete is a laboratory test specimen for small precast units.

ii.     Ponding Method:
In the ponding method, square or small rectangular artificial ponds are built with the use of sand or lean mortar or bunds of clay across and along the surface. Water is filled in small square or rectangular ponds two to three times per day depending upon the atmospheric condition. This method is efficient but a huge quantity of water is required.
This type of curing method is applicable on flat surfaces such as pavements, footpaths, flat roofs and floors.

iii.     Sprinkling, Fogging or Sparying Method:
Curing by spraying of water or fog of water is one of the conventional method of curing in the construction industry. It can be an efficient method of supplying additional moisture for curing and, during hot weather, helps to reduce the temperature of the concrete. Water is sprayed on the concrete members by using nozzles or sprayers but care must be taken to prevent the concrete from drying between intervals of water spraying. A disadvantage of this method may be its cost and required an adequate supply of water and also careful supervision.

B.      Membrane Curing of Concrete:
Membrane Curing methods prevent the loss of mixing water from the concrete surface. Sometimes concreting carried out in remote places where might be an acute shortage of water, therefore huge quantity of water is required for water curing method, then these methods are suitable for concrete curing.
Membrane Curing of concrete can be done in the following types:
i.      Wet Covering or Moist Curing Concrete Method:
In this method, wet covering such as hessian or other moisture retaining covering are used to maintain the moisture on the surface of the concrete by completely covering the surface immediately after the concrete has hardened sufficiently. They must be continuously kept wet to prevent the fabric from absorbing moisture from the body of the concrete, due to capillary action, Generally jute bags, cotton mats, hessian cloths etc. are used for covering.

ii.      Plastic Sheeting or Sheet Curing: Sheet curing may not be so efficient but are usually satisfactory for all except very special work, and they have a big plus point that they can be carried out more easily on both horizontal and vertical surfaces as well as on the surface of different shapes and sizes. Concretely could be effectively covered with a plastic sheet so that it seals the evaporation of water from the concrete. The curing concrete with the plastic sheeting, after a short spell of water curing for one or two days is sometimes beneficial. A simple yet effective, way of keeping moisture in the concrete is to cover it with a 125-micron (500-gauge) polythene sheet. Polythene sheet materials are easy to handle, store and can be reused. 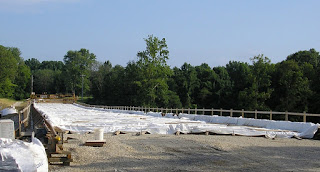 iii.      Concrete Curing Compounds: Curing Compounds are Sprayed on the concrete surface, forming a thin liquid membrane on the surface and result in prevention of to a certain extent of evaporation loss and can be used in both horizontal and vertical surface. It is essential to choose the correct type of compounds. The compounds are available in two types, 1. Clear or translucent and white or 2. Aluminized pigmented.
1. The clear or translucent curing compounds may contain a fugitive dye to assure complete coverage of the concrete surface by visual inspection. This dye disappears quickly after the application without causing stains and it is not applicable to a dry surface.
2. The white or aluminized pigmented compounds are for external paved areas because they reflect the sun’s rays, thus keeping the concrete cooler.

C.      Heat & Steam Curing:
In this method, the rate of strength gaining of concrete increased, by providing heat and additional moisture to the concrete. When concrete is subjected to higher temperature, it accelerates the hydration process and resulting in faster development of strength. Concrete subjected to this heating technique tends to cure uniformly and much more rapidly rather than other processes.
In this method concrete objects to be cured are placed inside a camber or cabin, an operator can able to set the temperature and humidity level by using the control panel. The heat and moisture go into the materials quickly and hydrate the concrete fully and harden them. This Method is most commonly used for precast concrete plants where products are mass-produced and the turnaround or striking time of the formwork is very quick.

The types of steam curing method are as follows –
i.            Steam Curing at Ordinary Pressure:
Steam Curing at ordinary pressure is generally done in an enclosed room to minimize heat and moisture losses. This method is often carried out for prefabricated concrete elements, especially for pre-stressed concrete members.
ii.            Steam Curing at High Pressure: This method of curing is carried out in a closed chamber and super heated steam at high temperature and pressure in applied on the concrete. It is also known as “Autoclaving”. The Autoclaving process is applied in curing precast concrete members in the factory such as lightweight concrete products.

Email ThisBlogThis!Share to TwitterShare to FacebookShare to Pinterest
Labels: CONSTRUCTION